skip to main | skip to sidebar

PRESIDENT OBAMA: WHERE DO WE GO FROM HERE? 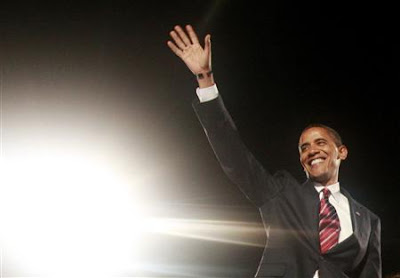 Last night, watching the results roll in, I spoke with a friend who commented that it feels like we are living within history. Record numbers of Americans have chosen to stand up, make their voices heard, and shape the destiny of this country. Enough with waiting for our luck to change. Enough with excuses, cynicism, and conspiracy theories. Millions of individuals are ready and willing to unite, to take a higher path, and to steer this country toward its ideals.

Now the challenge is getting to work. Where do we go from here?

As jubilant as I am, my one fear is that Americans will be content to celebrate this victory, and to wait for change to come to them. But we cannot rest. A cornerstone of this campaign is responsibility for our country. As Barack Obama has routinely stated, government cannot fix our problems for us:

"Because loving your country shouldn't just mean watching fireworks on the 4th of July; loving your country must mean accepting your responsibility to do your part to change it. And if you do stand up, I promise you that your life will be richer, and our country will be stronger.

We need your service, right now, in this moment - our moment - in history. I'm not going to tell you what your role should be; that's for you to discover. But I am going to ask you to play your part; ask you to stand up; ask you to put your foot firmly into the current of history. I am asking you to change history's course."

Many Americans have already answered this call. If you actively serve in your community, now is the time to redouble your efforts. Find a friend or family member, and encourage them to do the volunteer with you. If you have never served, here are three easy, concrete ways to help:

The Boys and Girls Club

If you are interested in volunteering in another capacity, Volunteer Match specializes in lining you up with thousands of community service projects across the country.

Ask yourself: Are you really too busy? Could you find even one hour each week? Could you involve your family and friends?

Who else is going to do it?

My favorite Barack Obama quote: "We are the people we've been waiting for."

Looking forward to this new era of promise, what steps will you take to make this country better?

Posted by Christopher Arnold at 10:01 AM 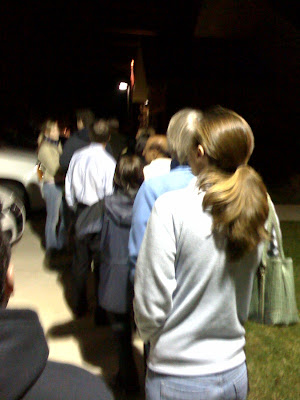 I thought maybe we could beat the rush.

To our surprise, at 5:55 a.m., there was a wait just to park at our local polling station, the Klondike Library here in West Lafayette, Indiana. More than 150 people had formed a line that wrapped around the building. According to public radio, similar lines were forming all across Tippecanoe County, before the polls had even opened.

I didn't early vote because I enjoy the communal process of election day, and today was no disappointment. How many times have you heard this election described as historic? Over the last 20 months, that term seems to have been blunted. But on a morning like this, the sense of history was palpable. I had never seen anything like it--enthusiastic voters, young and old, walking out of the library with a look of pride on their faces.

Polls will be at maximum capacity across the country today. These crowds can only mean good things for Obama. Let's face it, people don't wait in line for hours to put incumbent parties back in office. You could say that the voter turnout represents a thirst for change, but it's more than that--only anger would truly motivate voters to come out in such force. Americans want their country back.

Regardless of who wins, this election has breathed new life into American democracy. This election will bring millions of people into local, state and federal politics for decades to come. The American electorate in 2008 is a broader, more fully realized cross-section of American values and identities, and for that, we should all be thankful.

Many former red states will turn blue today. Here in West Lafayette, lines moved along smoothly. Voting took around 55 minutes. On the way out, the sun was rising on a beautiful Indiana morning. 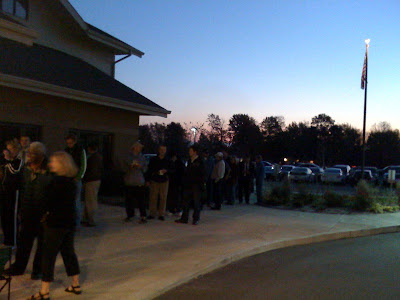 How was your experience at the polls? Where did you vote? How long did you have to wait? Any predictions from your state?

Posted by Christopher Arnold at 7:30 AM

TOMORROW WE FINALLY TURN THE PAGE 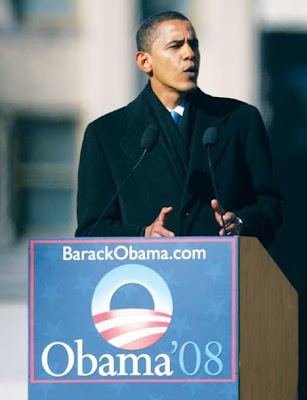 Last night, I got to thinking how I've spent my entire adult life, from age 18 to present day, under the Bush administration. It's difficult to wrap my head around how these past eight years have influenced my perspective on liberty and country. In 1999, when I graduated from high school, I entered college with an almost limitless sense of possibility. Since then, I've seen:

I could go on. These are just the first things that come to mind as I sip my coffee this morning. The surreal thing about the Bush administration is that they failed us in so many ways that it's difficult to see the trees through the forest. But as you head to the polls tomorrow, please don't forget that the failures of the GOP are not simply vaguely angering or disappointing, but rather a laundry list of specific, malicious, and unlawful acts that have put the Constitution and the country in jeopardy.

Throughout the past eight years--somehow--I've managed to commit myself to optimism, and to the future. For three years, I taught high school English in a community on the U.S.-Mexico border. Presently, I continue to teach at a large University in the swing state of Indiana. It wasn't until Barack Obama ran for president that I found a canditate who shared my belief that if we can work together, we can affect profound change, tackling our most profound social challenges.

Since February of 2007, I've blogged diligently on behalf of Obama. I can't imagine how many times over the last two years I've heard people tell me, and I'm talking Democrats here, "You really think Obama is going to be elected president?"

Thankfully, millions of Americans now embrace this possibility. What was once unbridled optimism, even naivete, is now a distinct possibility. But we need your help.

Please, call your other friends and family, the red ones, even if those who are die-hard, lifelong Republicans, and give them your most impassioned argument in favor of a new era of American politics.

I know that it's been an exhausting race, especially for those of us who have been doing this for going on two years, now. But please, make these last 24-hours count. Right now, the candidates are working harder than they ever have in their lives. The candidate whose supporters do the same will win this election.

See you at the polls.

Posted by Christopher Arnold at 7:23 AM

These election night predictions are courtesy of the Washington Post's "Topic A".

Dick Morris advised Bill Clinton's 1996 reelection campaign and is a contributor to Fox News; Eileen McGann, a lawyer, is co-author with Morris of "Fleeced"

"It does not matter how wide or narrow the gap is between the two candidates. What matters is how far above or below 49 percent Obama is in the final polls (49 percent assumes that Ralph Nader gets 1 to 2 points as he did in 2004). Right now, Obama is straddling the 49 percent mark; about half the polls put him over it and half under it. If the final polling numbers indicate that Obama is not convincingly north of 49 percent, we are in for a long night."

Extraordinary youth turnout will surprise many, but it shouldn't. Young voters will vote overwhelmingly Democratic up and down the ballot in record numbers. As for a surprise on Tuesday, the combination of Ralph Nader and Bob Barr's votes will affect the outcome of the presidential election in one or more states.

Usually, the "undecideds" who show up in polling break pretty evenly when both candidates are well known. This year's "undecideds" are generally older, more rural, voted for Bush over Kerry, and they are concerned about Obama's inexperience and liberal views. The undecideds will break toward John McCain.

By all accounts McCain is behind but closing in on Obama, who appears to be stronger in the electoral college than in the popular vote. It's not pretty for McCain, but it's not over. Three ingredients could be mixing to create an explosive comeback for McCain. No. 1: buyer's remorse and resentment of the media forecast. Voters are being lectured that the election is over. This might cause them to have regrets about Obama and resent being told what they had already decided. No. 2: presumptuousness by the Obama camp. More than once they have shown a tendency to act like they have won, to assume that the Oval Office is already theirs. Voters resent this and may be itching to show their independence. No. 3: Obama fatigue and classic American support for the underdog. Voters notice the number of ads, phone calls and gushing accounts of the giant Obama machine. Maybe the good old US of A instinct to support the underdog is working to McCain's benefit.

Smart incumbents are campaigning as though their lives depend on it. Tuesday night may well bring the defeat of long-serving politicians from heretofore safe districts and states. And it may be very late before we know the leadership and chairmen of the House and Senate.

Obama's decision to forego public funding has enabled his Internet-fueled campaign to compete in states where he has potential but otherwise would have been forced to write off. We know what they are; look at the advertising buys. McCain has to carry a whole string of states where he is behind or effectively tied; Obama has to win in just a few. He has many routes to victory, McCain just one. Don't be surprised if some place we never thought would go Democratic does. The Obama campaign has signaled that several could -- and in the process left the other side constantly on the defensive.

Do you have any election night predictions?

Posted by Christopher Arnold at 12:00 PM